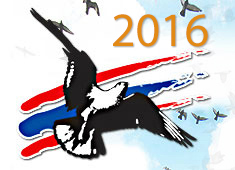 There are some adjustments to this year program. Following the request of our supporters, the distance for the two hot spot races are reduced to 260 and 330 km while the final race will be from 500 km slightly northeast of Bangkok. Thailand has just passed a new animal protection law and we feel starting the first race from 330 km is too much for young pigeons besides the risk of losing too many pigeons from frequent long distance road training in bad weather. Secondly, the opening and closing time to accept the birds will be a month later than before, i.e. from March 1 to June 30, 2016. This is to allow participants to send their second or third round youngsters to the race so that they can keep their first round for their local races. Accordingly, the first two races will be moved further by about one month starting in the second or third week of December and the final race will be in the second week of January 2017. Road training can begin in late October which has less risk of raining while most pigeons will be 7-8 month old already. Thirdly, the entry fee will be Euro 125 per bird or Euro 625 for a team of six pigeons (average Euro 104 per bird). This 25% rise will be compensated by higher money prizes i.e. the first three prizes in the final race will be Euro 24,000, Euro 8,000 and Euro 4,000 respectively. There will be more prizes for all other races too, both in terms of number and amount. For a foreign nominated first prize winner the total purse will be Euro 29,600 which is 285 times of the average entry fee per bird!!!  Nominated birds did win the first prize in final race many times including the past two years.

With the promised prize while total number of birds is limited, participants would not have to compete with thousands of free organizer’s birds.

TGPR 2016  (For foreign participants only)

Note:  Any fund left after deducting the prize money and operating cost from the total entry fee received will be donated to charity project.

Prize Money (For foreign participants: all prizes are in Euro)

If all the prizes are not taken by all arrivals up to the closing time frame, the remaining prize money will be shared equally among the pigeons that return within the time limit.

If any of the team’s two nominated pigeons wins the final first prize, the owner shall receive a special bonus of Baht 200,000 (Euro 4,000)

The pigeon that has the lowest sum of coefficients from all the three races shall be declared the first ACE pigeon
Formula to calculate coefficient of each race is as follow:

Coefficient = (position won within the first 15 % of pigeons in the race / direct air distance of that race)
The first ACE bird will receive Euro 2,000; second ACE bird Euro 1,200 and third Ace bird Euro 1,000

Note: All money prizes and proceeds from auctions will be paid to foreign participants in Euro at the fixed exchange rate of Baht 50 per 1 Euro.

Honorary Board of Directors