There were 607 pigeons in good condition participated in this final race from Nongkai, 530 Km north-east of Bangkok. They were released at 7.15 am in good clear sky and mild wind behind the back. The birds did not hesitate one bit and took the right direction homeward. Back in Bangkok, the waiting on-lookers anticipated a fast race of some 1,400 mpm given the apparent strong NE wind of 15-30 km per hour. They had yet to be informed that there was heavy rain from about 200 km to Bangkok. Despite the rising temperature in the afternoon, the enthusiastic and hopeful owners braved the heat waiting to see the return of their winged athletes. Not until two hours after the predicted arrival time, a lone blue-bar little hen rocketed low from the eastern side of the loft escaping the eyes of most people and ran straight into the loft. She was clocked at 15.38.47.20 pm making a speed of 1052.0326 mpm. It took another twenty minutes for the second bird to arrive with the speed of 1012.2102 mpm. Followed closely was the third pigeon less than one minute later. Three more pigeons arrived within the next four minutes and the rest of the day saw the return of 27 more pigeons making the total of only 33-day birds.

Most of the country central region had heavy rain fall through out the night and continued until late morning of the next day making it difficult for the birds to return early except for the few that had already come close to the loft the day before. The second day had 233 more pigeons back home and 44 more in the third days. When the clock was stopped the following day, we had 323 birds in the loft. Looking back a year ago, we had 650 birds going to the 500-km final race. Only of 28 of them came back in the first day while the first two pigeons beat the third by 34 minutes. It was also a hard race but a bit milder than this year because there was no rain in the second day and the distance was 30 km shorter. It was unfortunate that our last two hot spot races were marred by unseasonal bad weather which turned perfect just two days after in both cases.

Back to the leader board, the first prize and King Cup winner, R17-11856, was entered by combination Veulemans-Techavichian. The father of this bird was from a cross between a son of Chris Hebberecht’s Hulky (via Jos Veulemans) and a granddaughter of Techavichian’s winner from 744 km. Her mother was a product from Frans Bungenners’ B12-2169556 (via Jos Veulemans) when paired with another grand daughter of Techavichian’s 744-km winner. The first runner up belonged to Harrie van Boxmeer, a long-time friend of Thailand’ pigeon racing circle. She was a dark-cheq hen with 75% blood from Mevr. Snellen & Zn strain and 25% Harrie’s own line of Koopman pigeon. The mother of this bird was a car winner in Poland race. While visiting Thailand our one loft race, Harrie heard the good news that his pigeon just won a car in SAMDPR race in South Africa. The third prize winner was a small blue hen ring number R17-05973 of Mr. Thongsuk Chuprachak, a descendent of his old Albert Monin and Marc Roosen strain. It was noticeable that all top three winners were small hens. Most of the first day birds had a different profile from past winners in both hot spot races. Most of them were from long distance strains and had not scored early prizes in training flights nor fast races before. Local birds appeared to have an upper hand winning 60 positions in the first 70 that were eligible to money prizes. Blue Blood team alone had seven birds in the first 70’s. However, foreign birds kept their presence felt by securing the second place while Premier Stud Syndicate, set up in memory of our beloved Mike Cooney, led the British team wining the 8th position. Mr. Jassim again led the Kuwait battalion taking the 25th position. Chris Hebberecht, winner of the first TGPR race by his ‘Home Alone’, had three of his four birds team back starting with the 26th position.
The weather condition didn’t bode well to fast pigeons the like of Hardy Kruger, Jos and Lars Vercammen and Team Bagillt- the defending Champion from last year. Had it been in normal weather condition, all these names would surely have their full potential exercised. Nonetheless, the track records of their birds in previous races and training would be remembered and reflected in the auction prices.

In Ace bird competition, there were more than 30 candidates that each had won two prizes within the first 15% in the two hot spot races. Since many fast birds did not make it in the final race, we finally had only five local birds that had won all three prizes. The winner was from TNC Group Rayong, a red hen R17-02016 with her record win of 11, 7, 31 positions and lowest coefficient of 109.3239. This hen also cleaned up all the pools. Second ACE bird belonged to Apichai Teachaubol R17- 09572 with her record of 47, 16, 45 and coefficient 267.3299. The third ACE bird was R17-05903 of Mr. Thongsuk Chuprachak with the record of 81, 92, 13, coefficient 499.9828. Detail of all five pigeons that had won three prizes each is posted in this website. 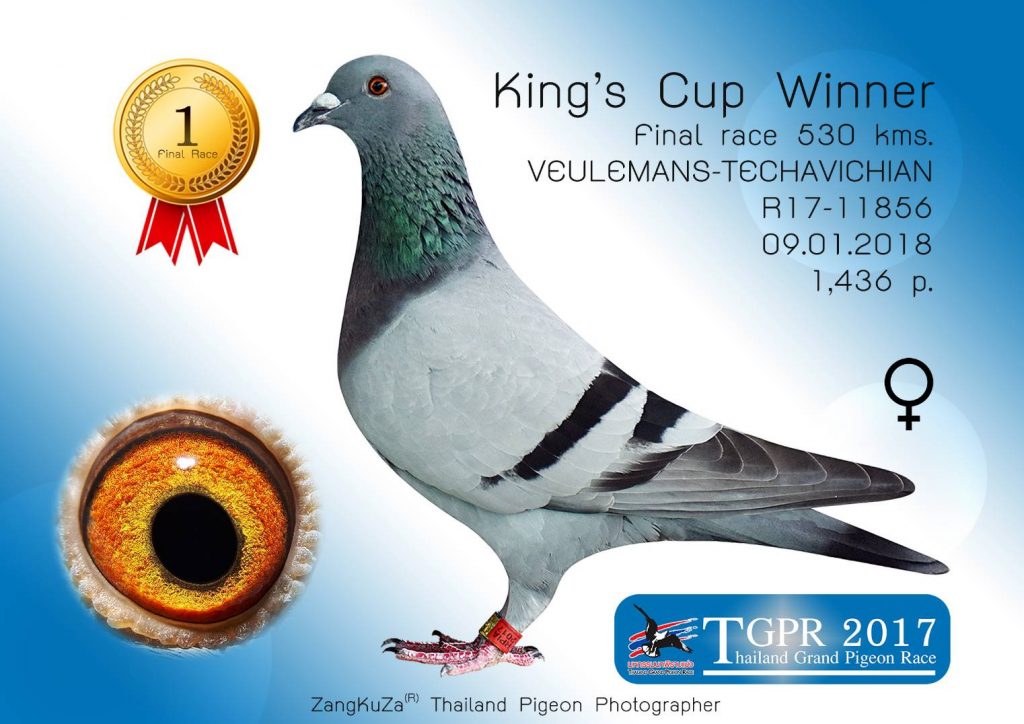 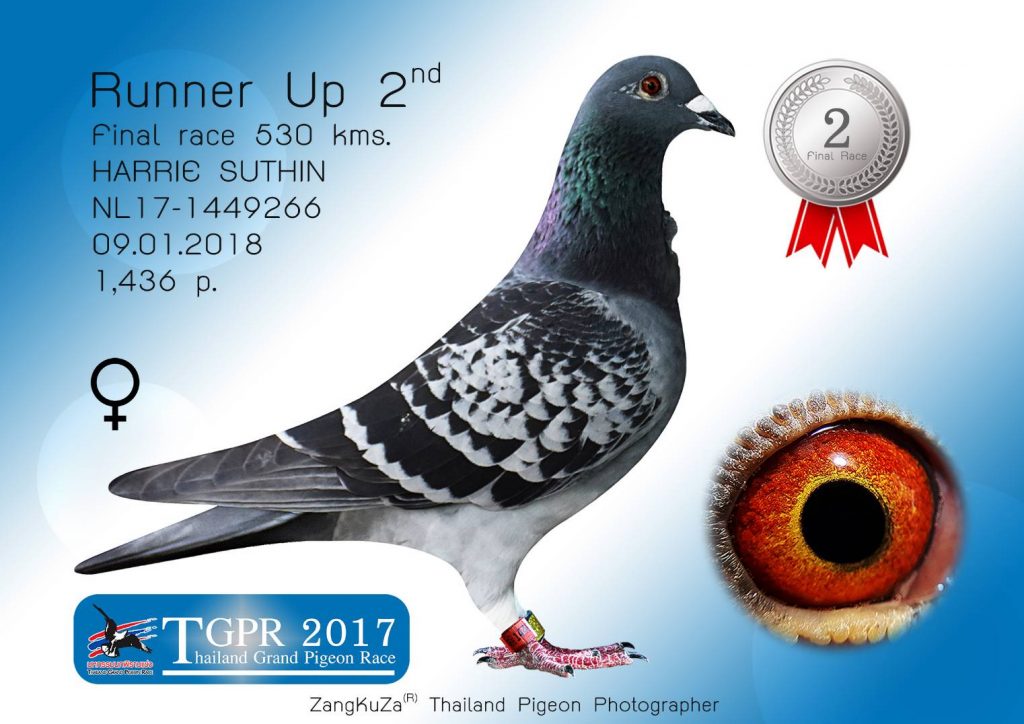 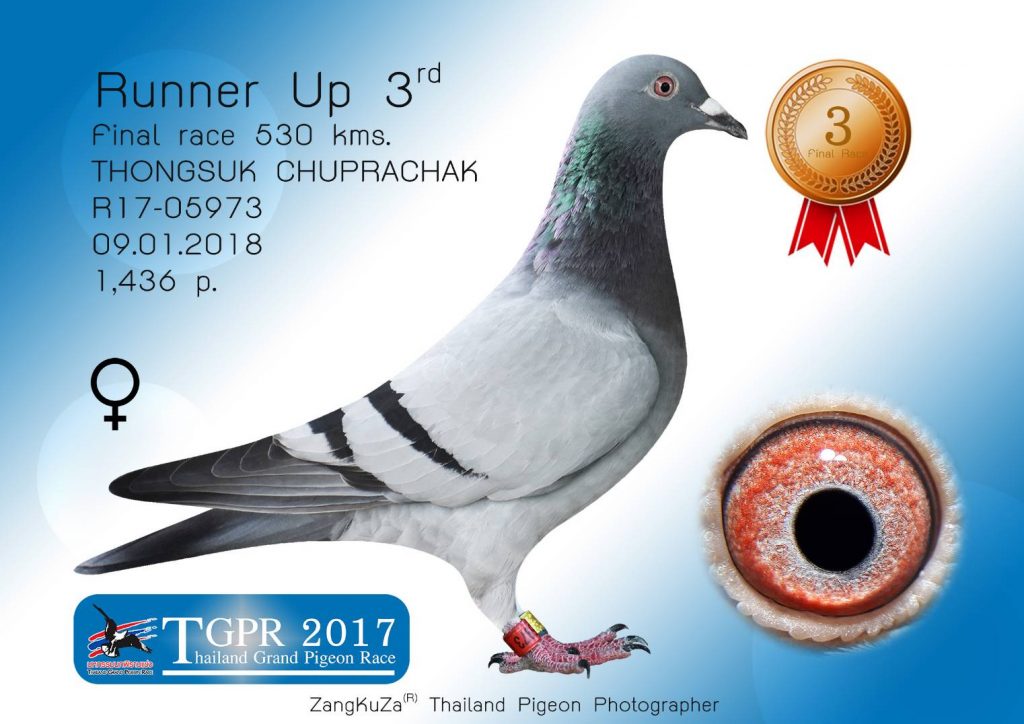 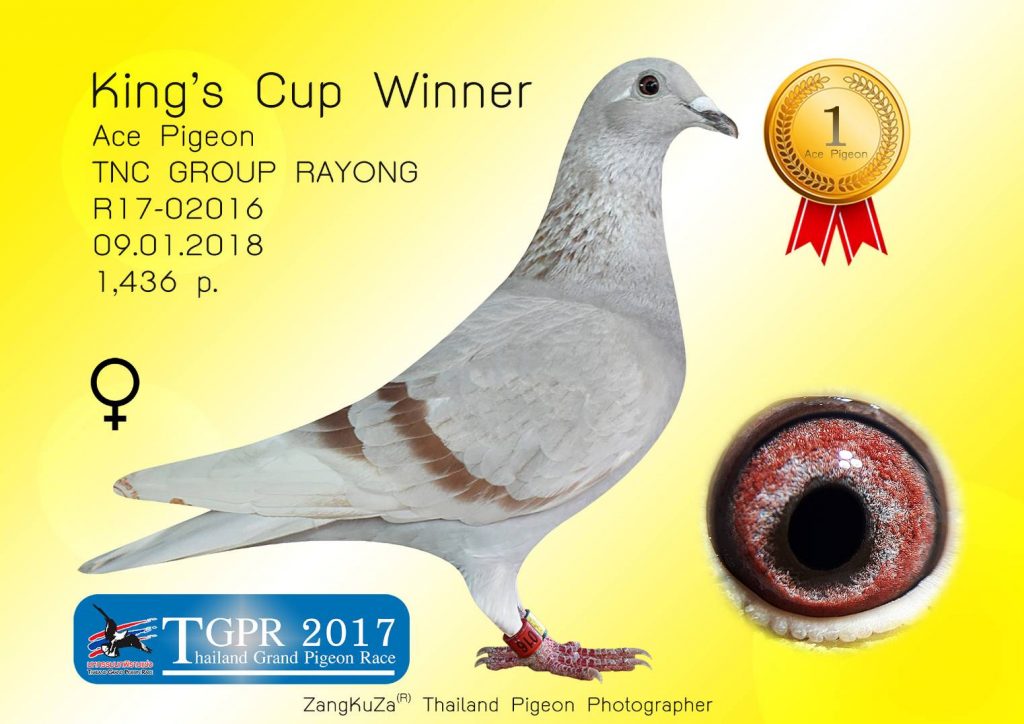 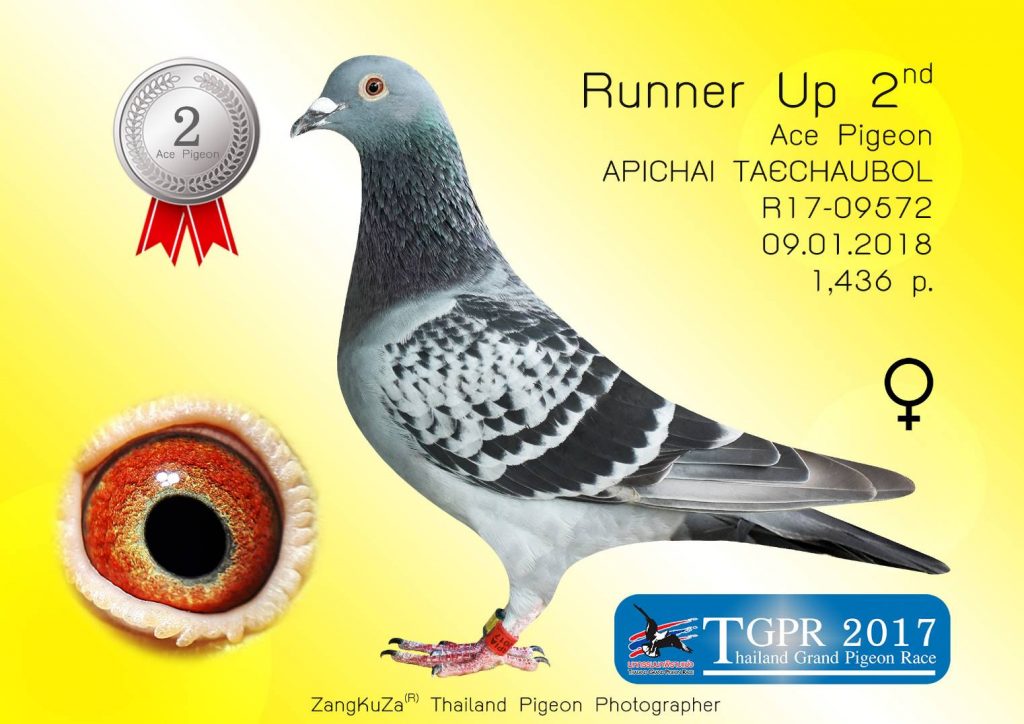 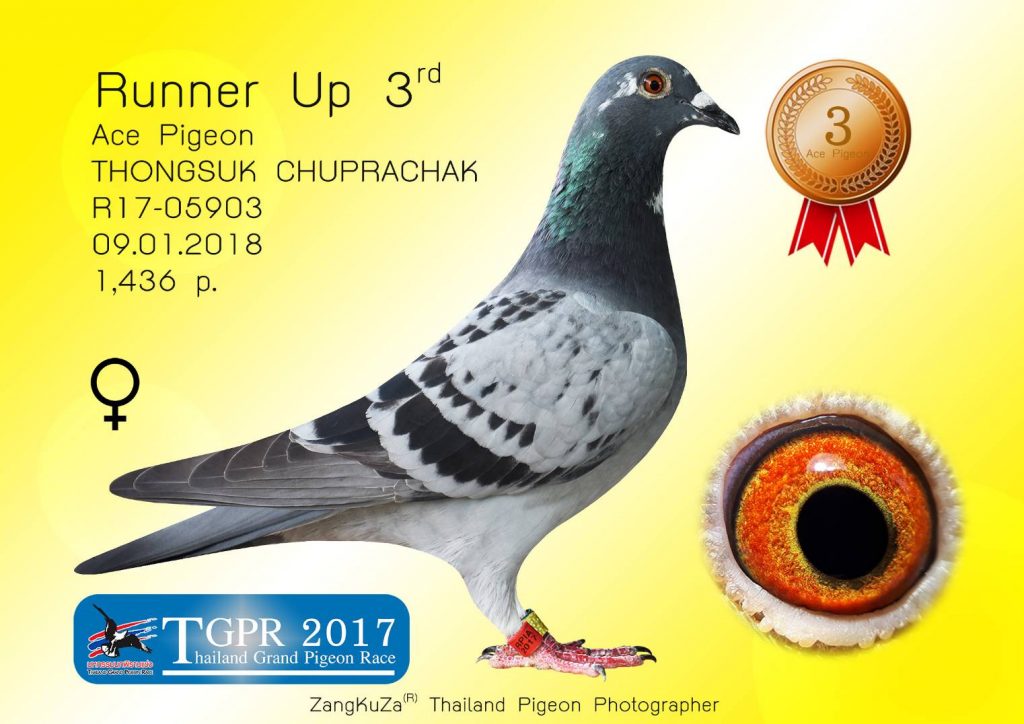